This week’s past project falls in one of my favorite categories: large outdoor construction. I really love projects that involve moving a lot of earth, and involve working with concrete and stonework. A future post will cover my wall and gate project, which remains one of my most ambitious project to date. This post, instead, will cover a project from the summer of 2015, when I built a fire pit and a large area of terraced stone veneer seating around the pit.

While the fire pit is the centerpiece of the project, it was far more straightforward to build than the seating. To build the seating, I first had to build the internal structure using cinder blocks. The cinder blocks would be anchored together with rebar over concrete footing, and would then be filled with concrete prior to be covered in stone veneer, with large paver stones used for the seats. This would give the terraced seating enough strength to survive the brutal Wisconsin winters without cracking due to the shifting ground caused by the freezing/thawing cycle. Transporting the cinder blocks down to the job site was a great opportunity to utilize the awesome hauling capabilities of my F250, since unlike an F150 it is able to take an entire pallet of cinder blocks in the bed and transport them off road through the ATV trails on my land. 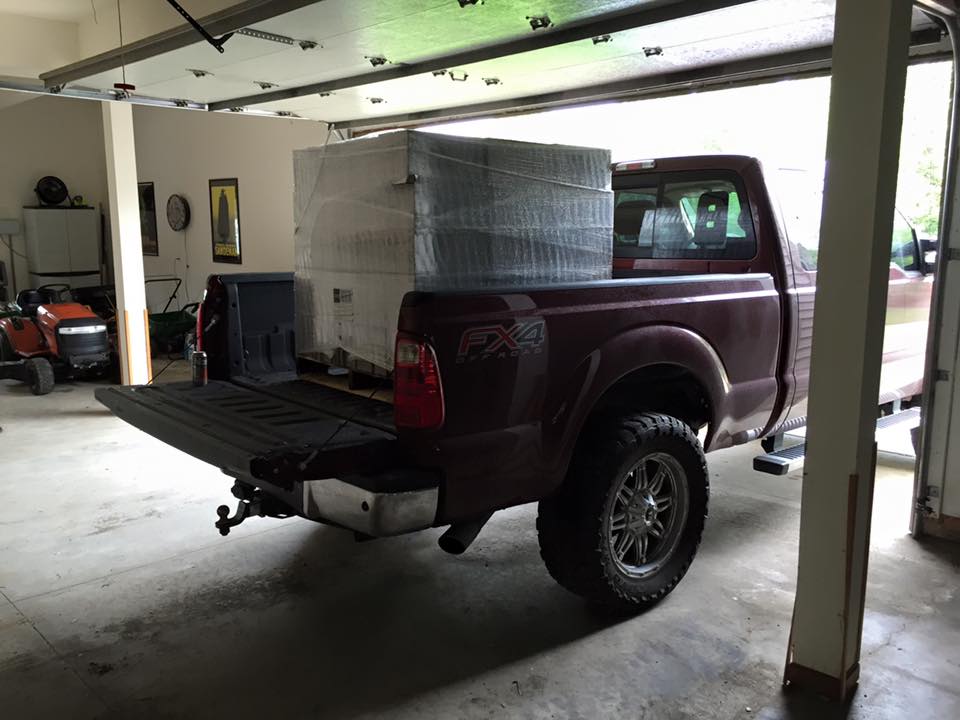 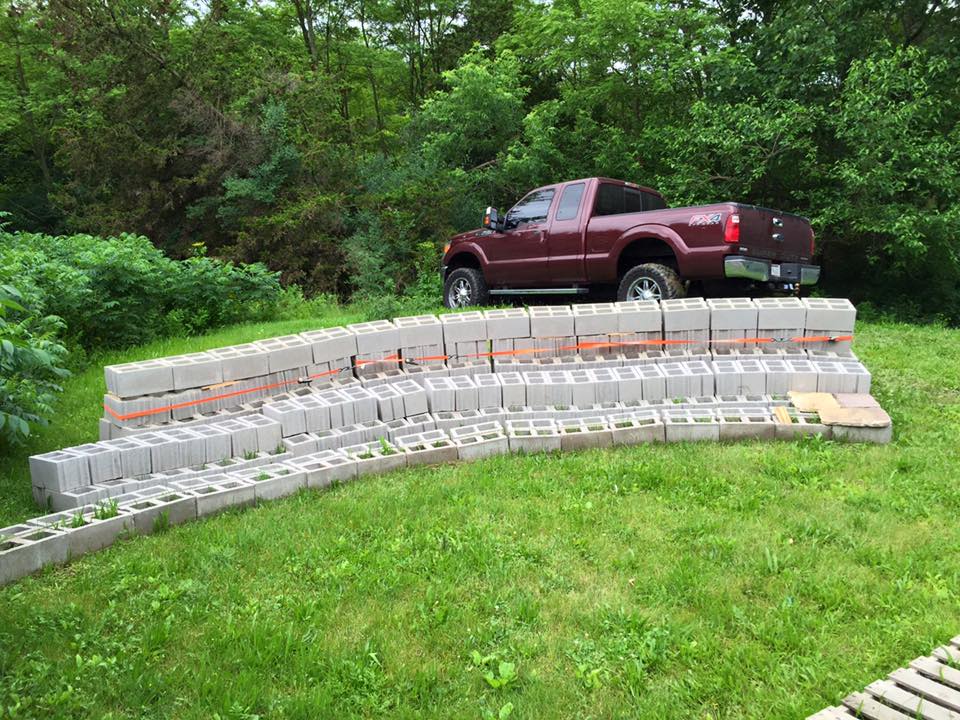 I used ratchet straps to hold the shape together prior to setting the rebar and pouring concrete. Once the concrete pouring was done, and mortar was applied to the cinder block joints, the structure maintain a rigid shape on its own. 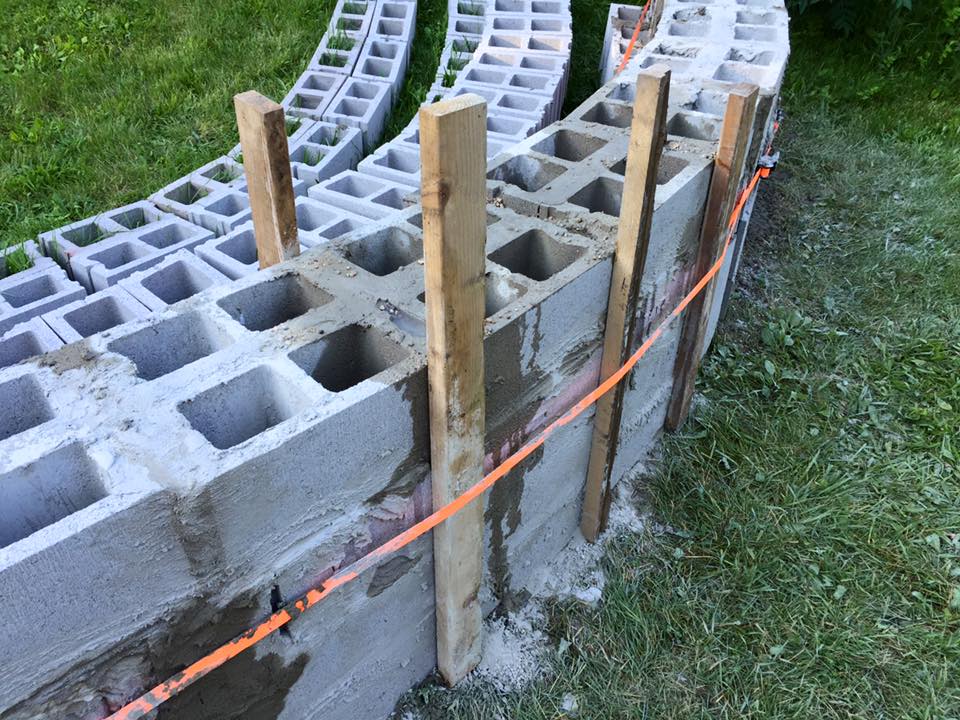 I repeated a similar process on the other side of the fire pit’s future location, and then filled the interior spaces of the cinder blocks with concrete to complete the structural work. 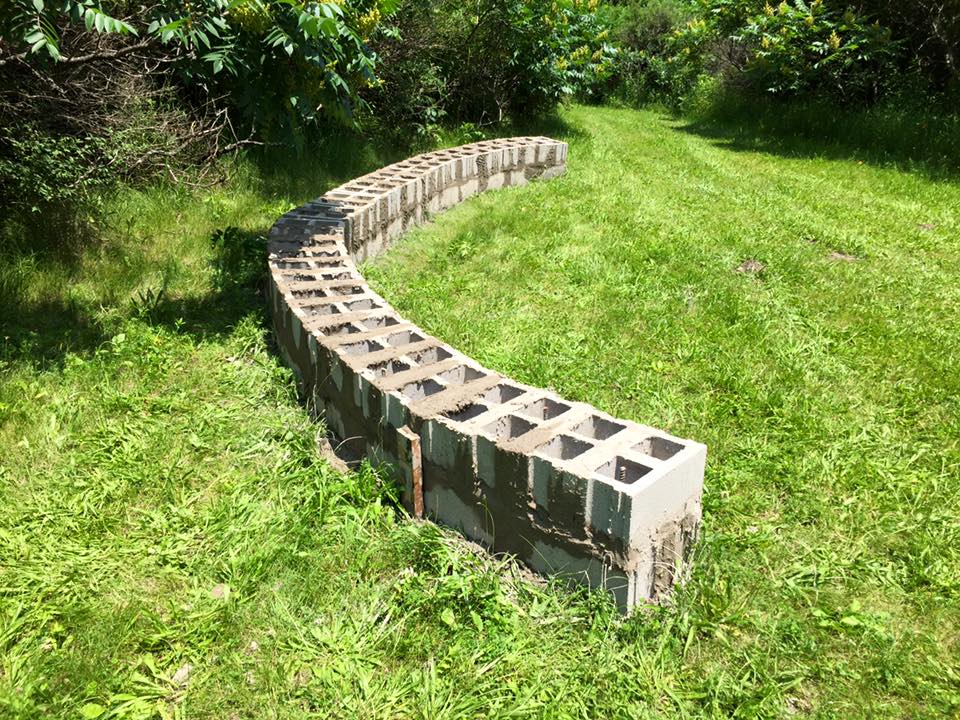 The next step was to set the paver stones for the seats with mortar, and then apply mortar in between the pavers to produce a flat surface. I purchased rustic flagstone pavers from the Home Depot, and laid them out over top of the cinder blocks. 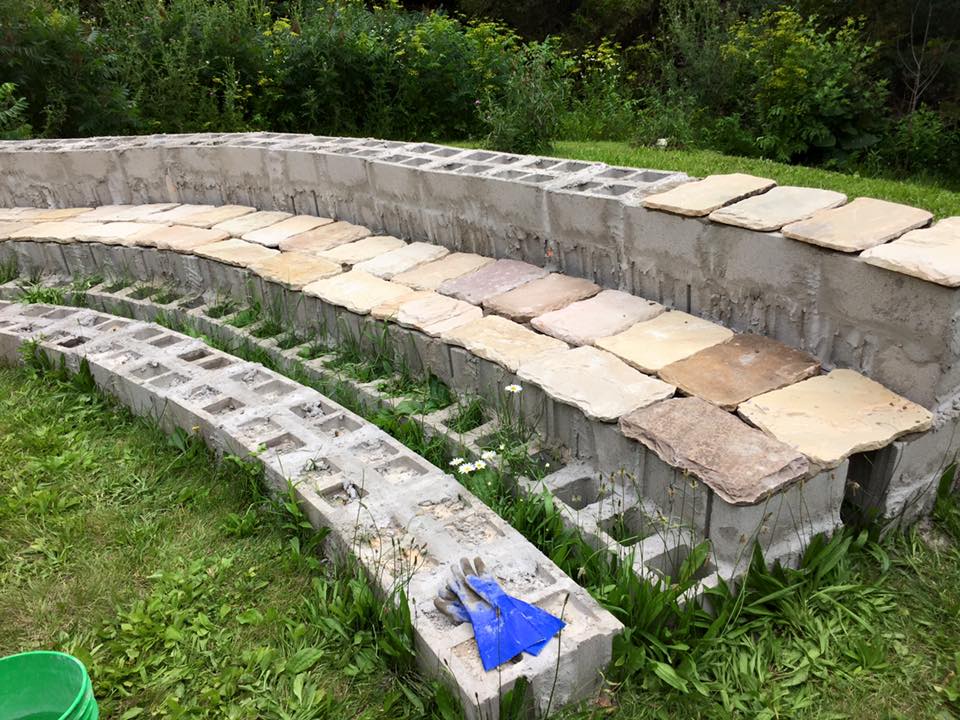 For the walls of the terraced seating, I used Quarry Ridge Bella Stone Veneer Ledgestones, purchased from Madison Block and Stone, and attached them with mortar. This complemented the rustic appearance of the flagstones. 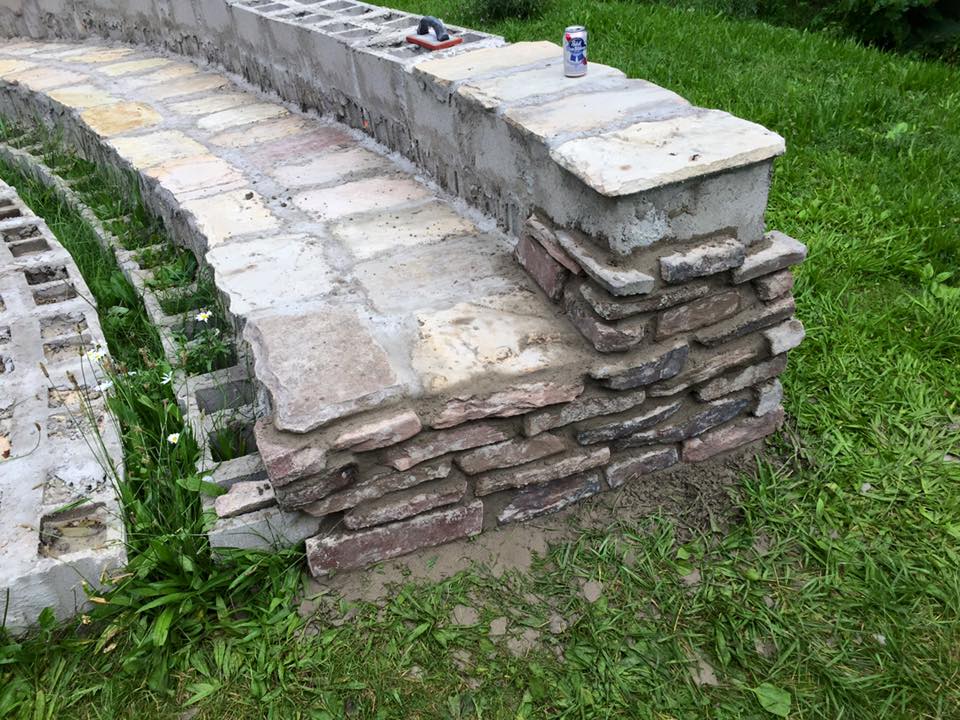 Once I had applied some of the stone veneer so I could verify that I liked the look, all that was left was to finish the stonework across all of the seating. I used my Polaris Ranger UTV to haul the stones and mortar down to the job site instead of the truck, since it was easier to maneuver on the small trails across my land. It can haul 500 pounds in its bed, so it was more than capable of hauling a day’s worth of stone veneer in a single trip.

After several weeks of work, the stonework was done: 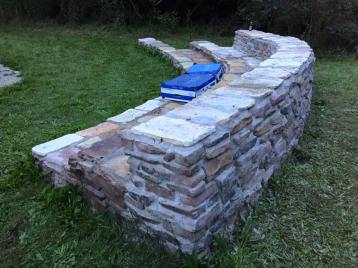 My focus then shifted to building the fire pit itself. I built it with brick and mortar, and use landscape stones to build the upper rim of the pit. I laid down gravel for the base, and then building the structure of the pit was a quick, straightforward process. 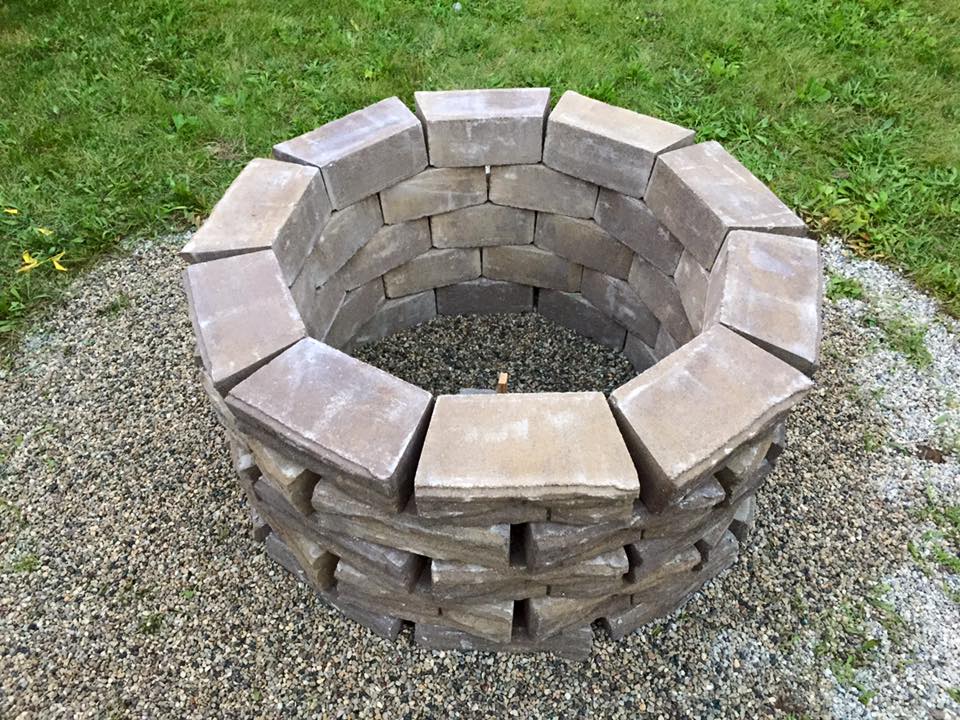 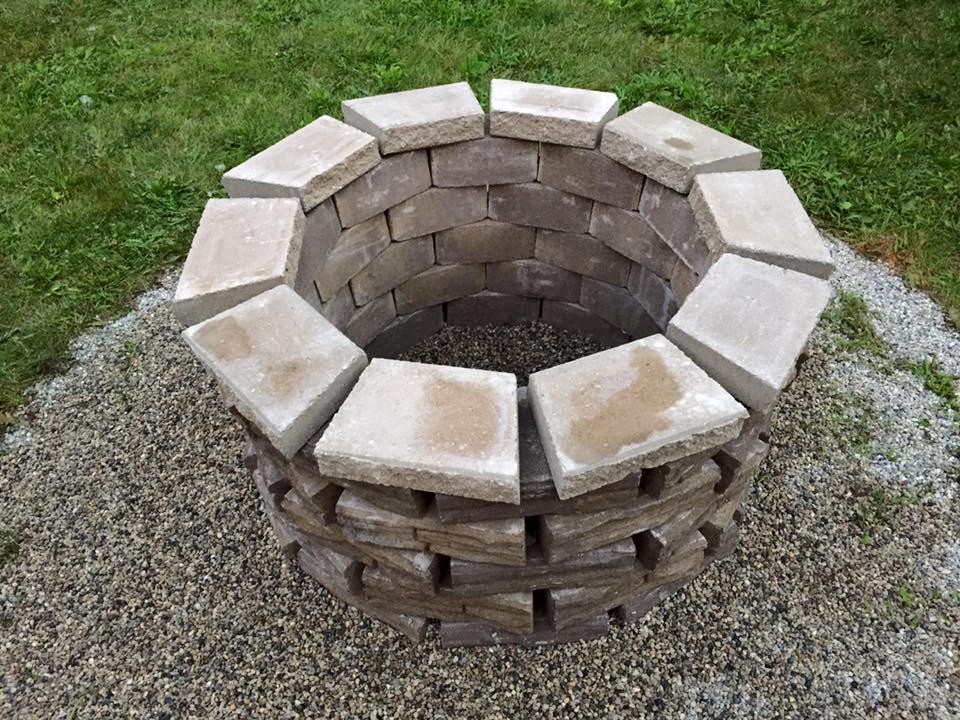 Once the mortar work was done, the fire pit was complete:

The final step was to apply bark around the seating areas, add some solar lighting so that people could see where they were going in the dark, and to have a sign made to place on the trails nearby the fire pit so that people walking from the house would know where to turn. 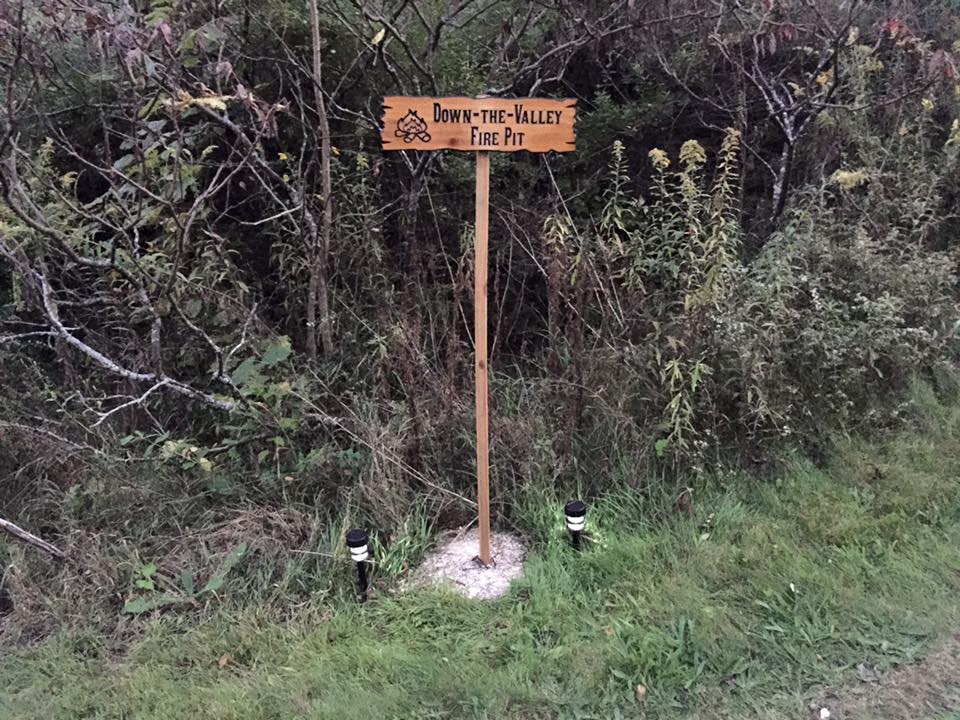 The inaugural fire in the fire pit was an awesome way to celebrate the completion of the project. Several weeks later, we had the fall Hardin Design & Development party at the house, and the seating area was put to use with about 30 people enjoying the fire.

One thought on “Fire Pit and Stone Seating Area”