Usually I try to keep posts on this blog fairly short, but this will be a longer one that covers an intense week of construction. When I first bought the lake house, one of the things I wanted to improve quickly was its ability to serve as a year-round house in Wisconsin. While it technically could due to baseboard heat, it was very inefficient and needed to be kept at a low enough temperature in the winter that all the plumbing had to be winterized. Therefore, this winter I started a project to install full central heat and air. Since this would require extensive propane, electrical, and ducting work, I called in pros from RA Heating and Air Conditioning, as well as Consumers Coop for the LP work. The goal was to get the project done for a budget of $15,000, which they were able to accomplish. Prior to them starting their work, I had to demolish the basement bathroom, as covered in another post on this blog. For a quick recap, here is a before and after: 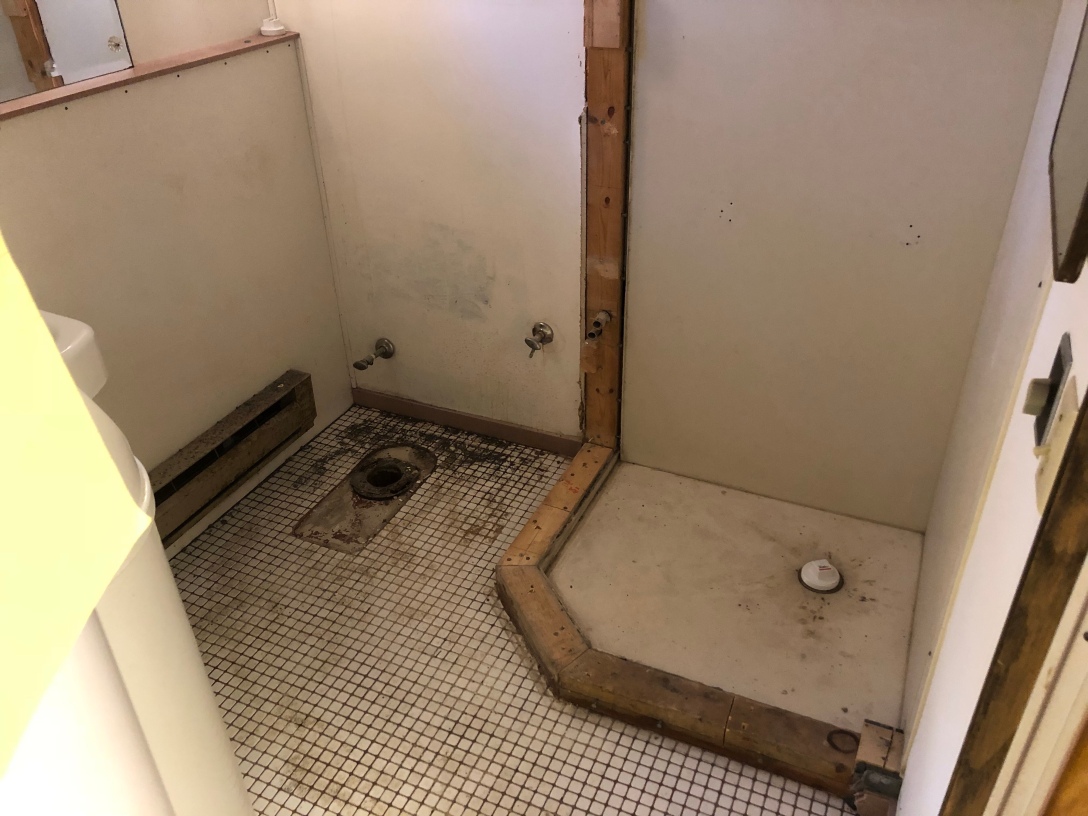 After that, RA came in and started their work. First, they cut holes in the floor for vents on the second floor. 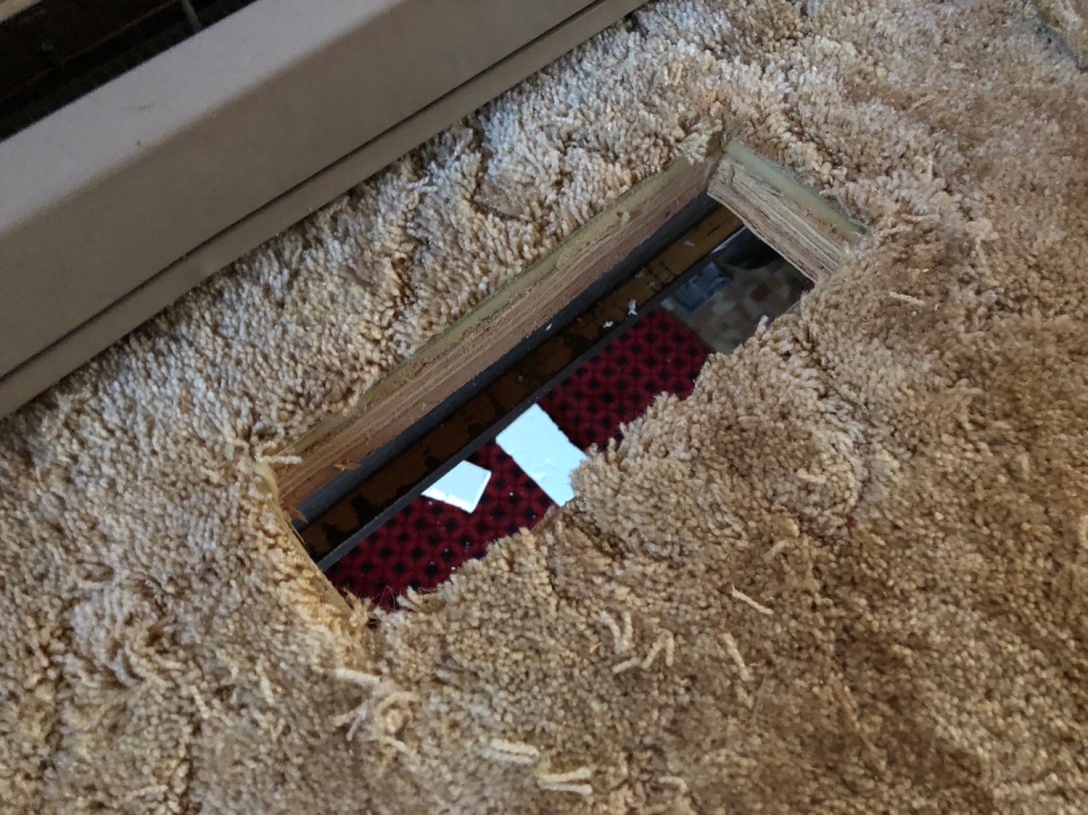 They also started removing sections of the ceiling in the basement, including the foam insulation. 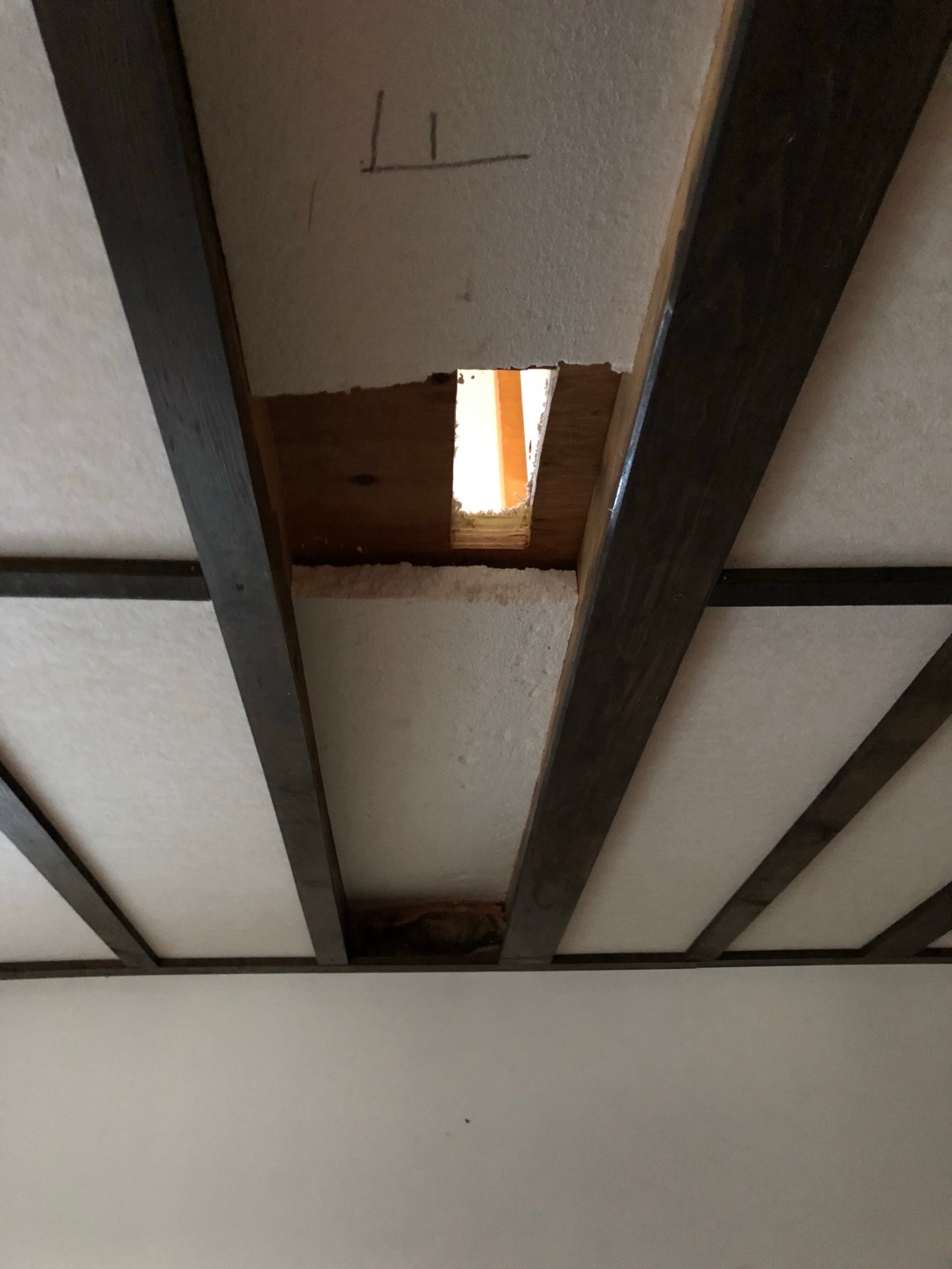 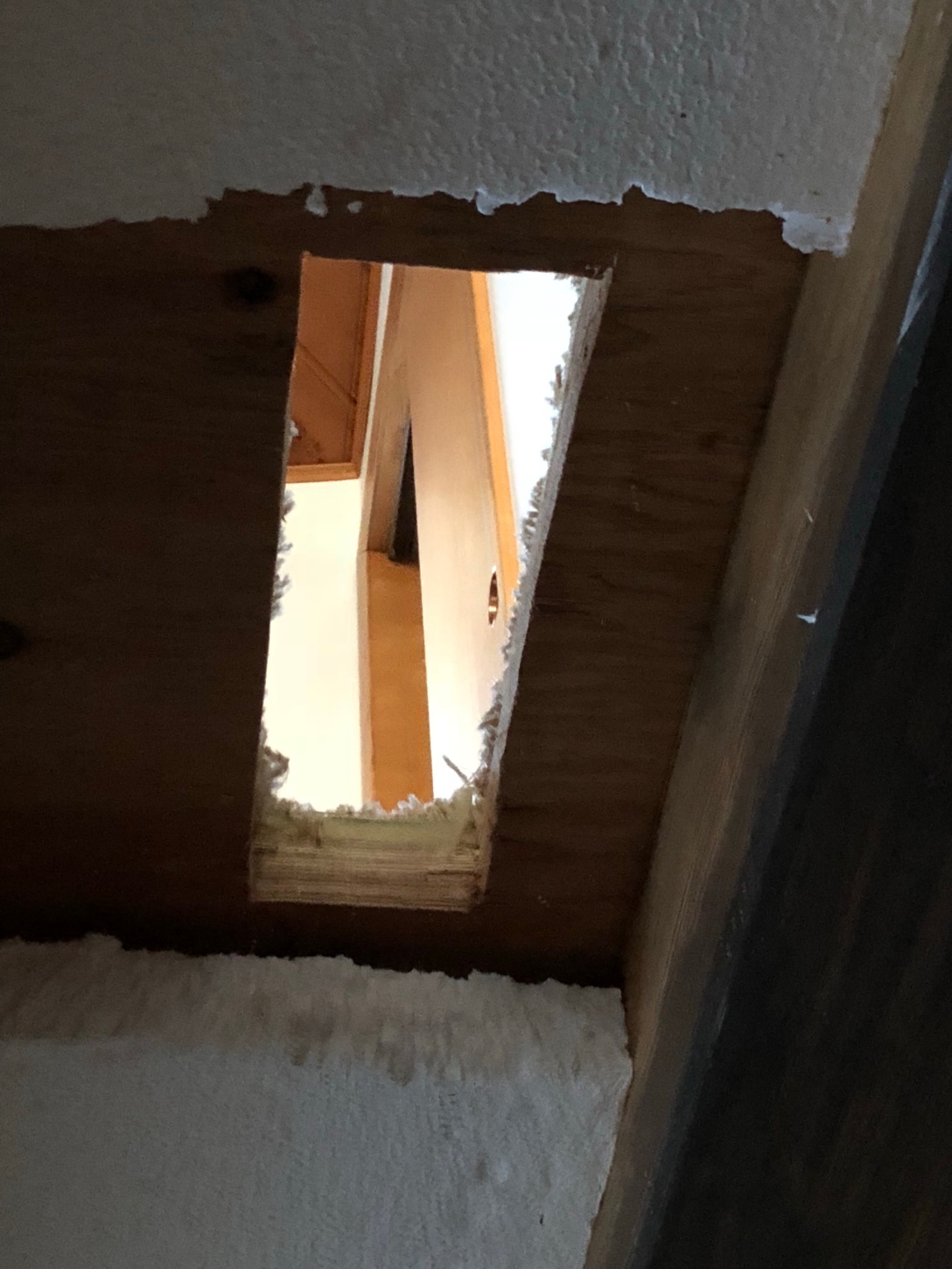 They did some further demolition to make additional appliance room.

The basement turned into a war zone of construction equipment, trim, and other debris. 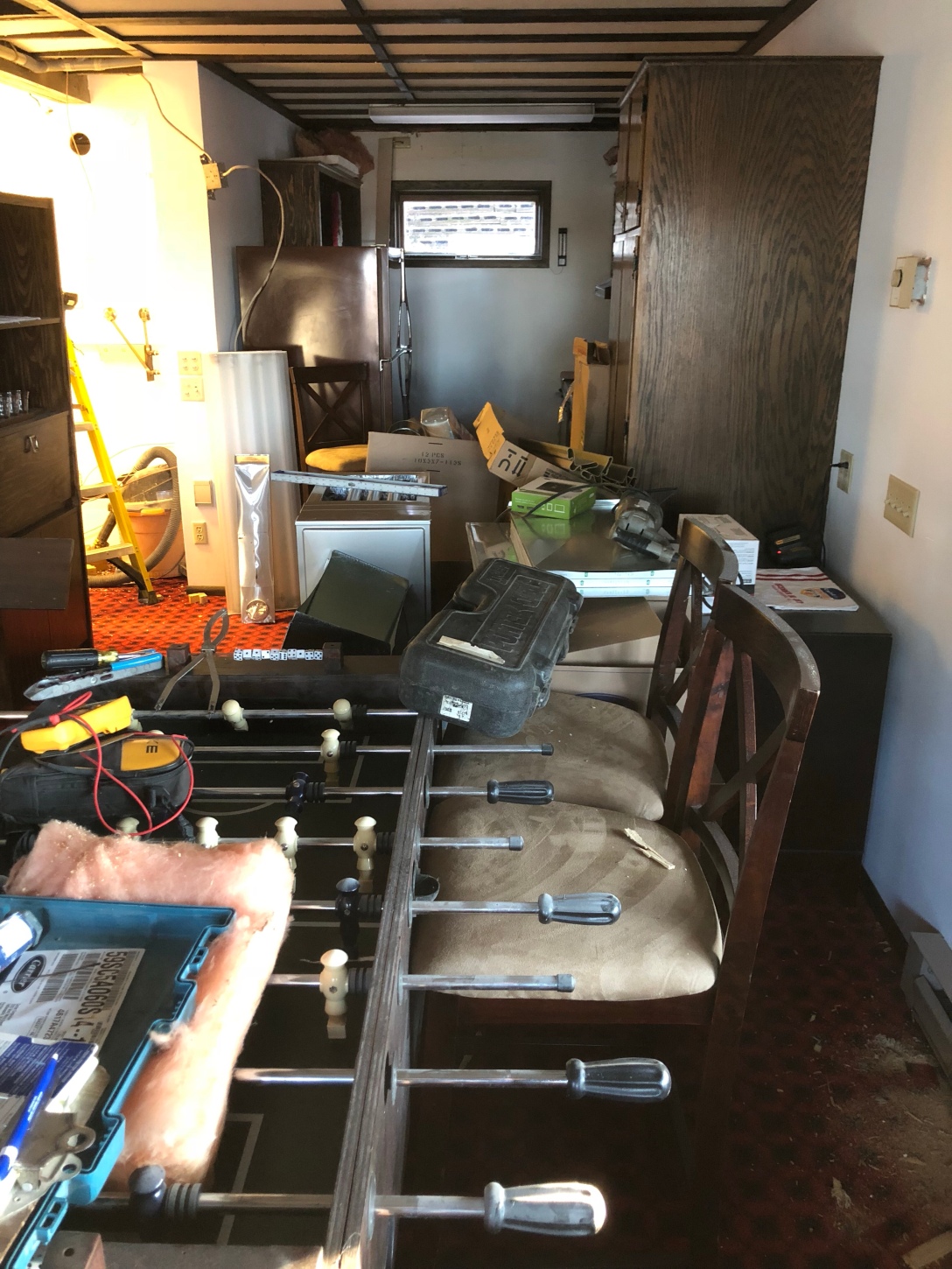 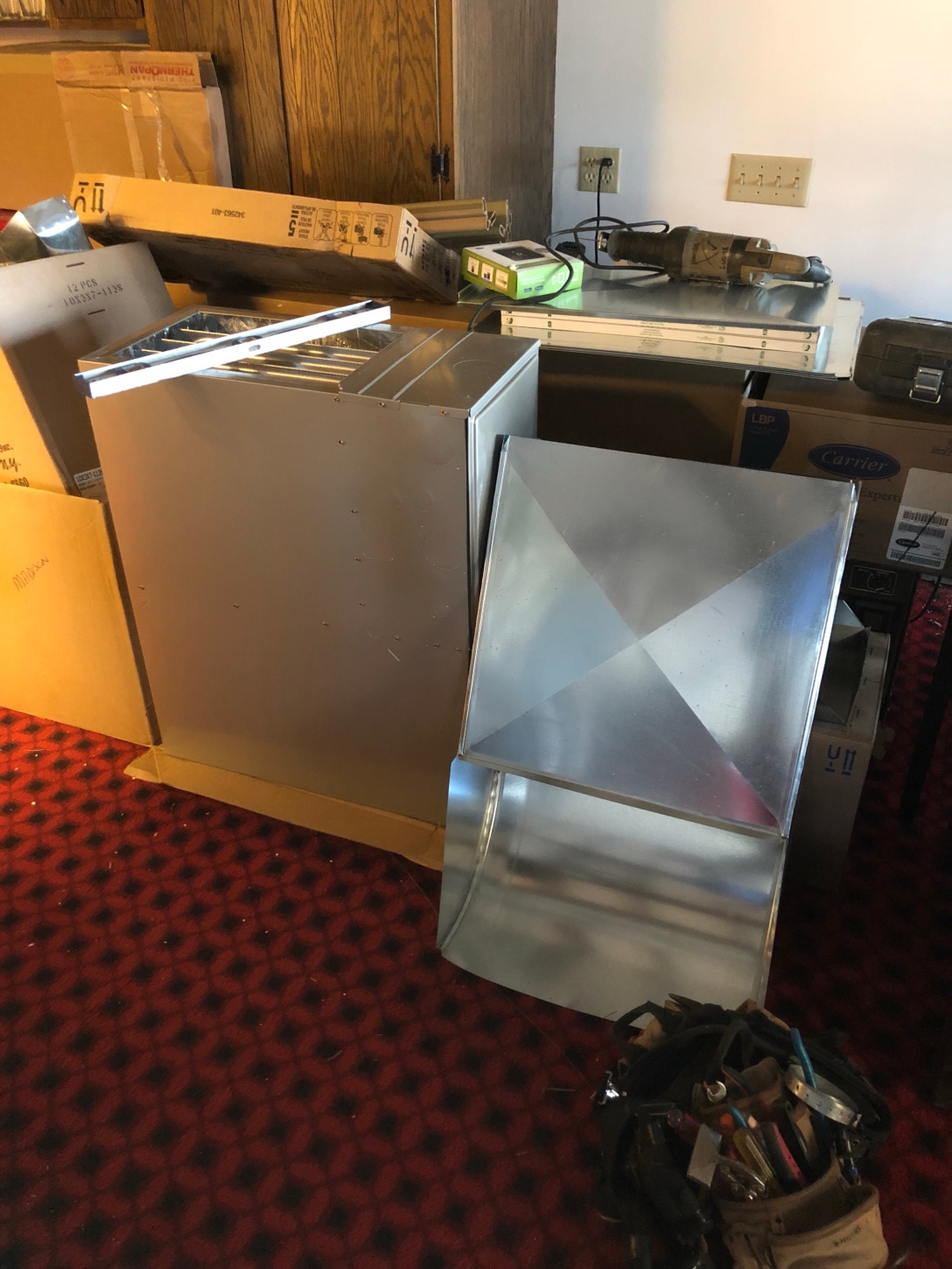 They were able to cannibalize existing circuits from the old bathroom to power the appliances in the utility room. 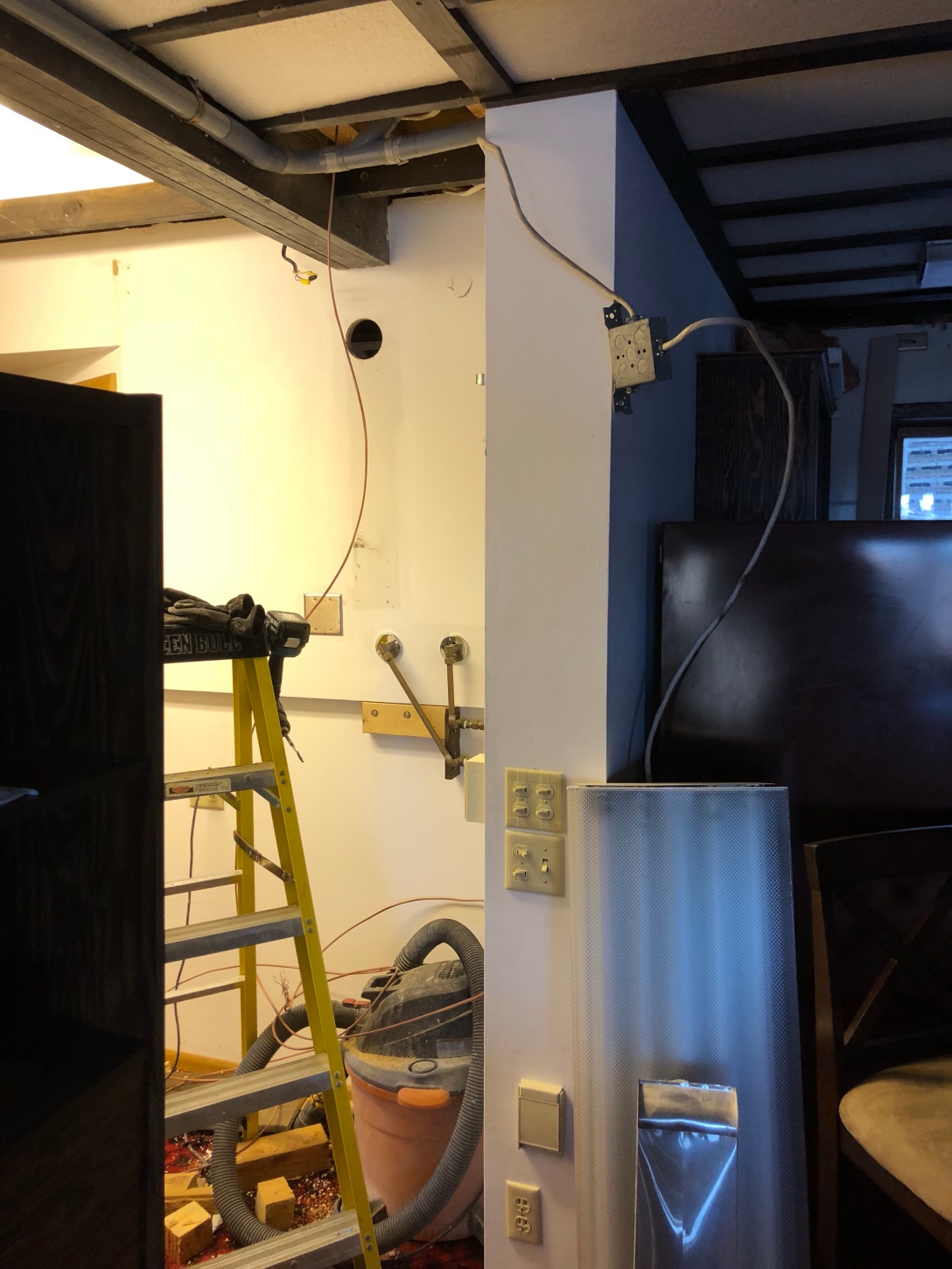 One the prep work was done, Consumers Coop came in and installed the LP tank, and ran a temporary line from the tank above ground to the house. Once the ground thaws later in the spring, they will return and bury a line below the ground. 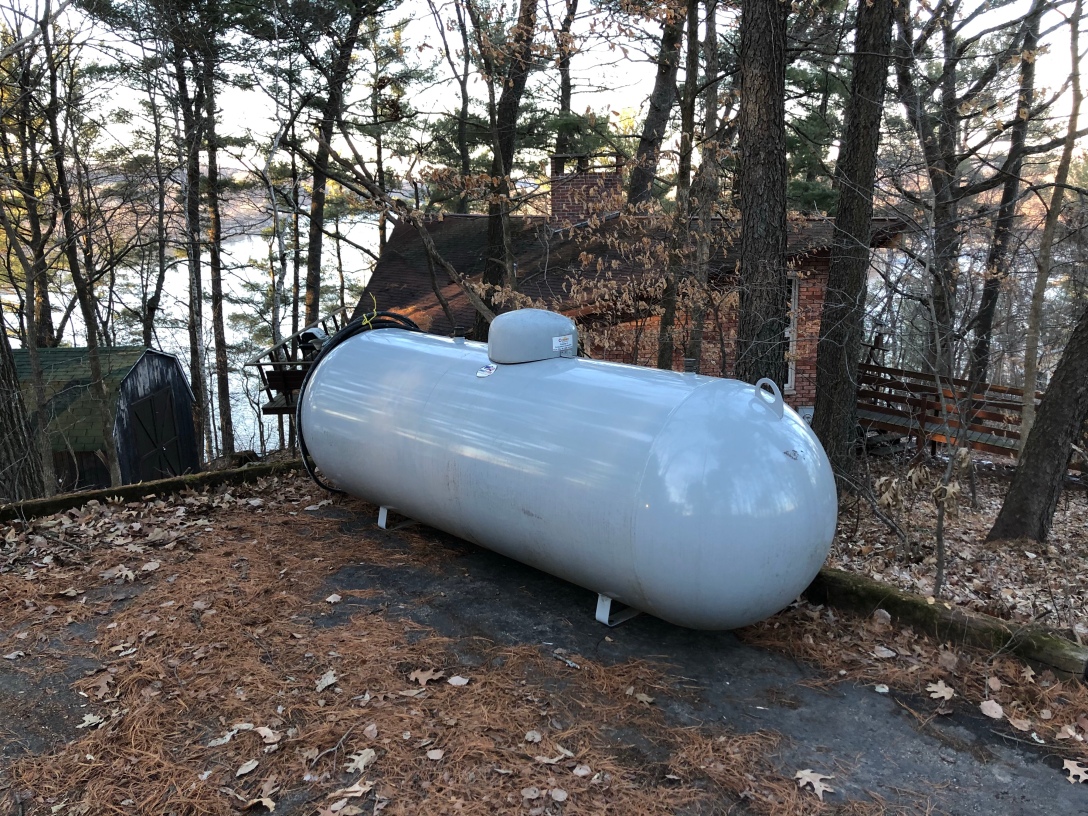 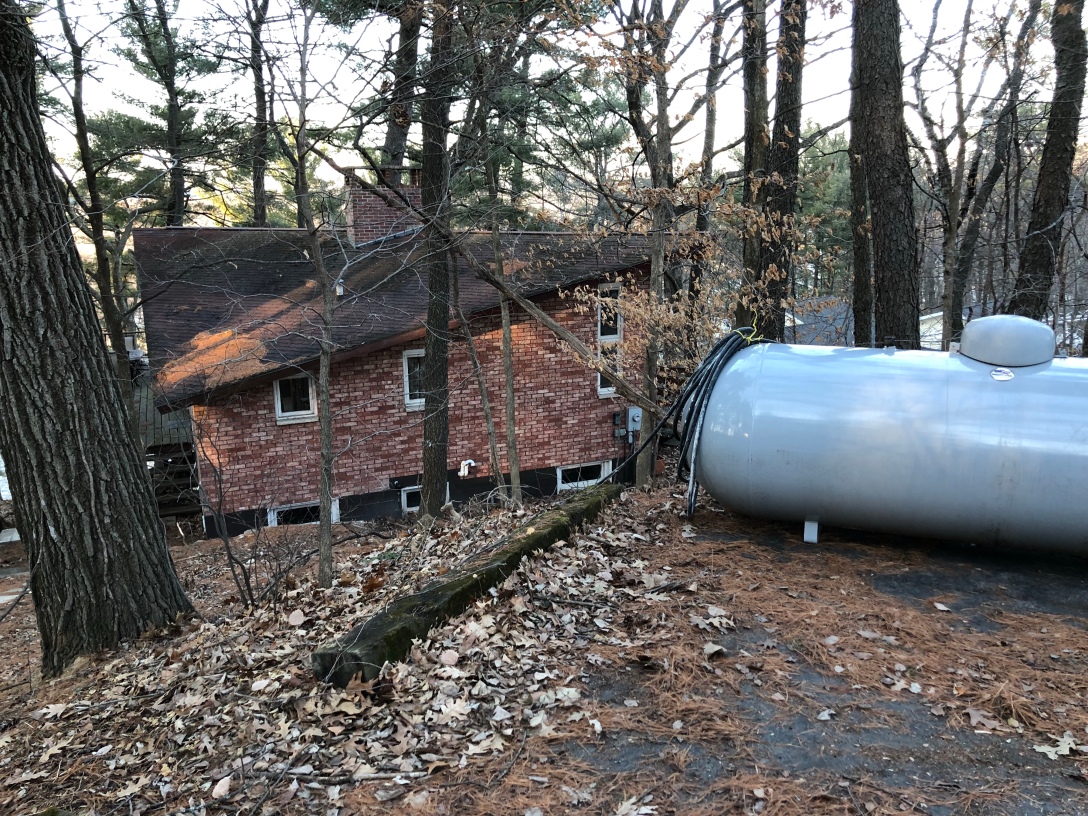 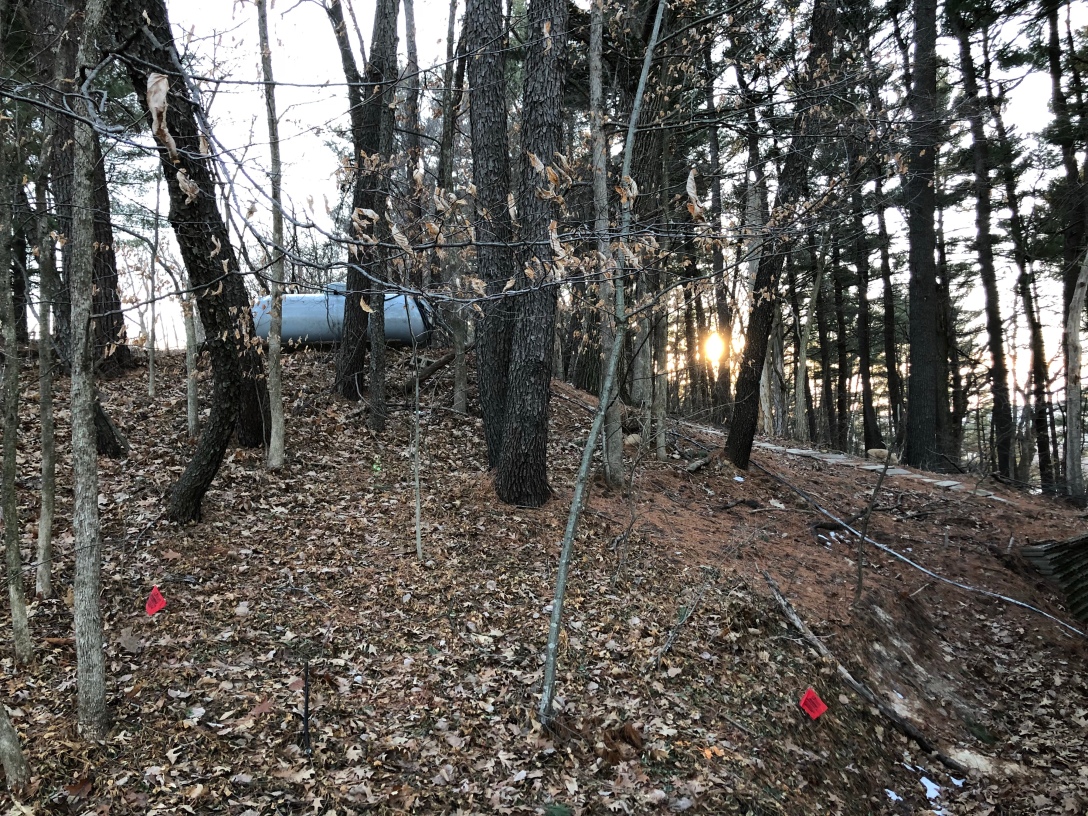 One of the requirements for getting LP lines installed is that the lines are fully hooked up to the destination appliances, and that a third party witnesses the installation and verifies that there are no leaks. This meant that RA needed to have the furnace in place, and enough venting and duct work ready to go. 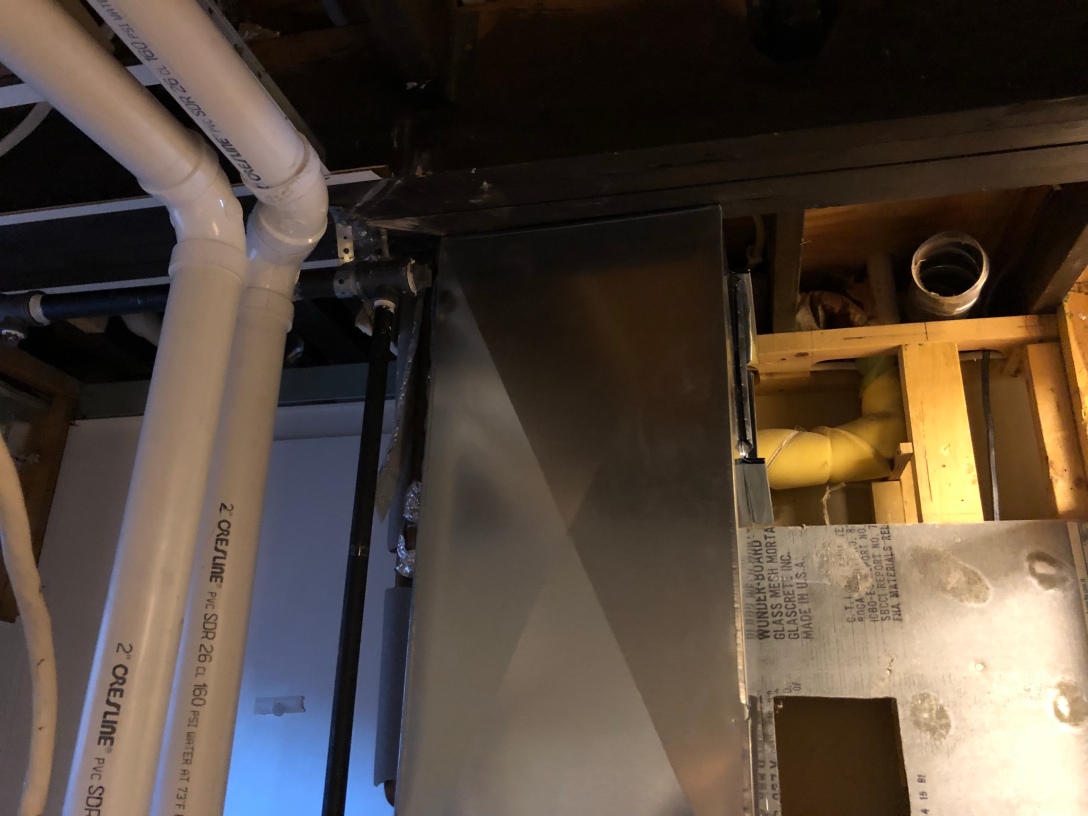 After that, they installed the remaining vents to the outside for the exhaust for the furnace. 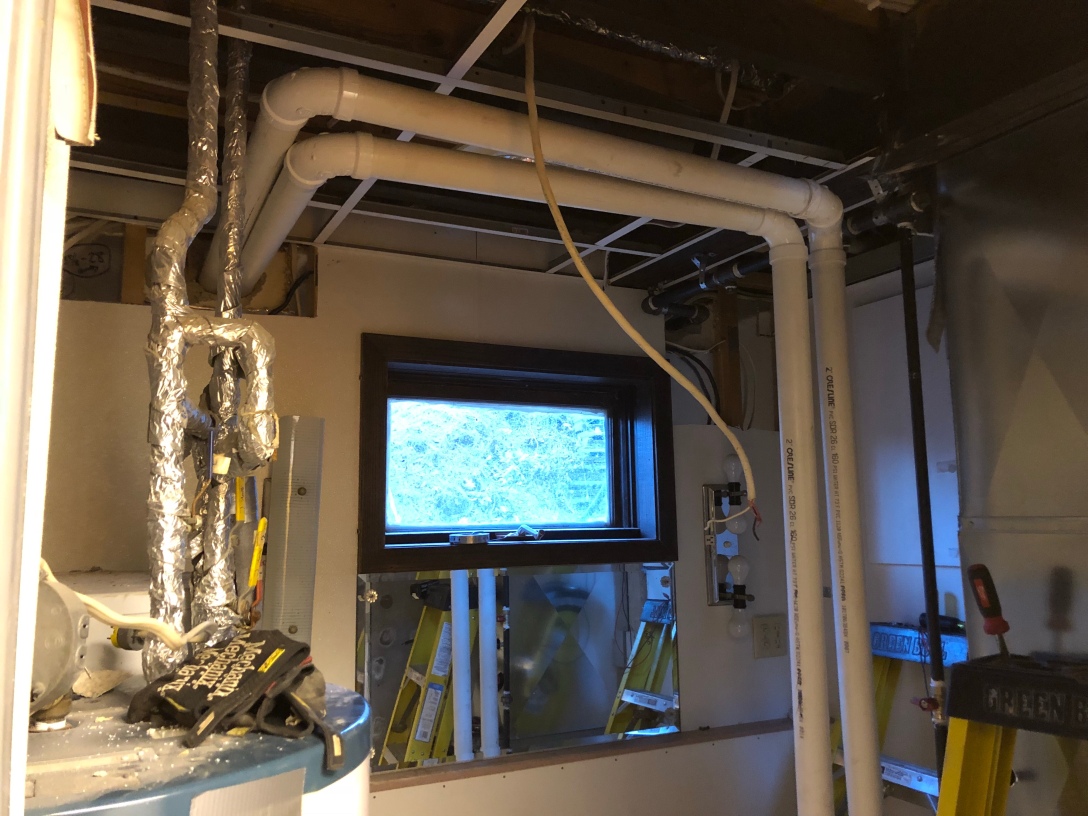 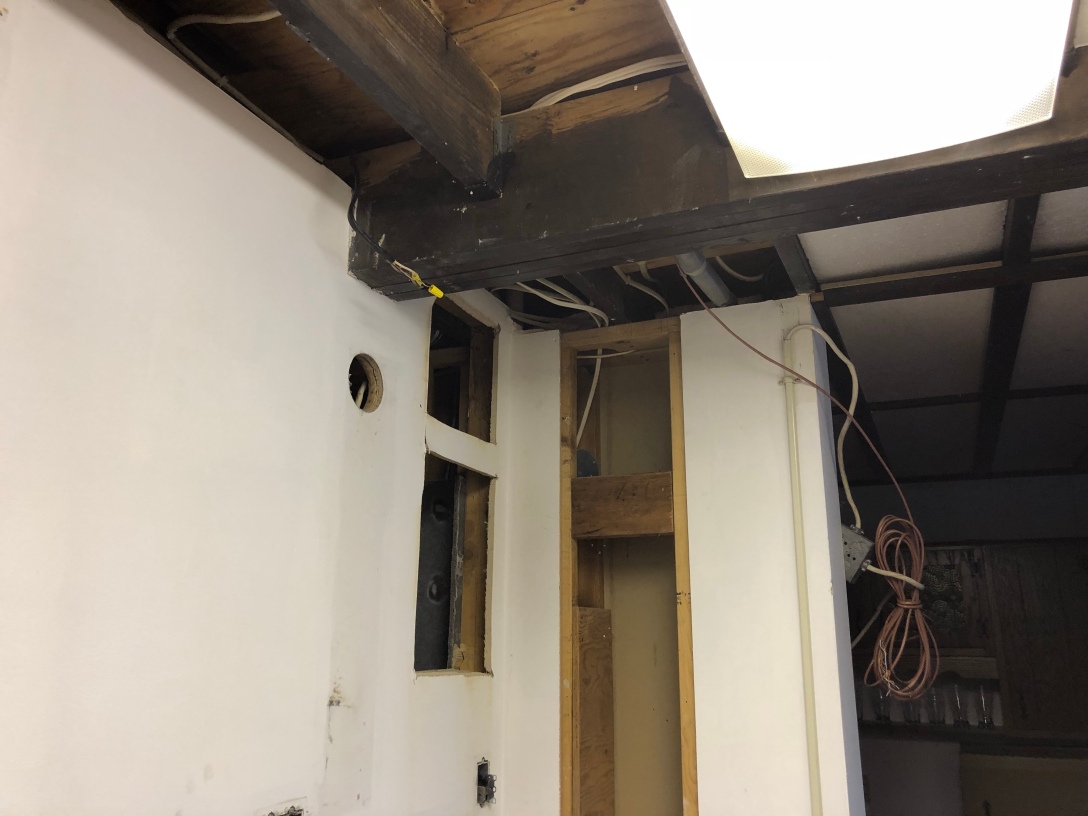 Next, they installed the vents in the basement to run heat and air to the floor vents upstairs, as well as to the walls in the basement. They did an extremely good job of blending the aluminum ducting with the existing wood beams and trim, in a similar fashion to how exposed ceilings in loft apartments or offices look. 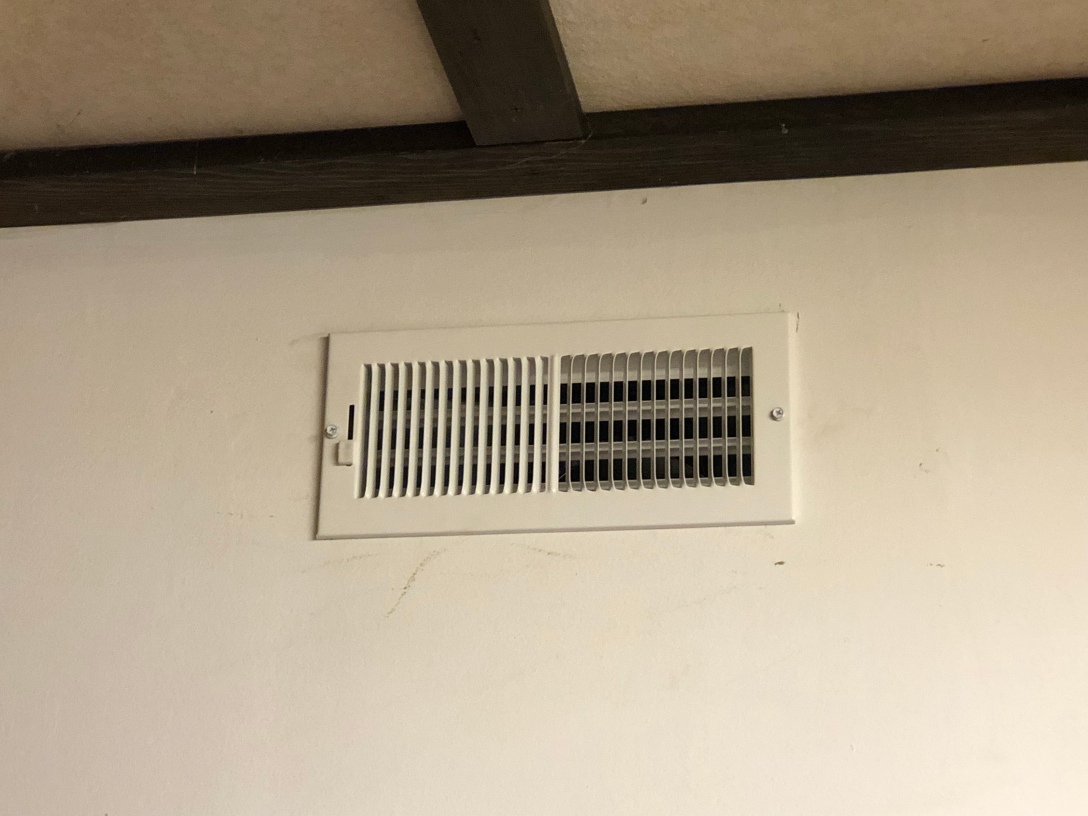 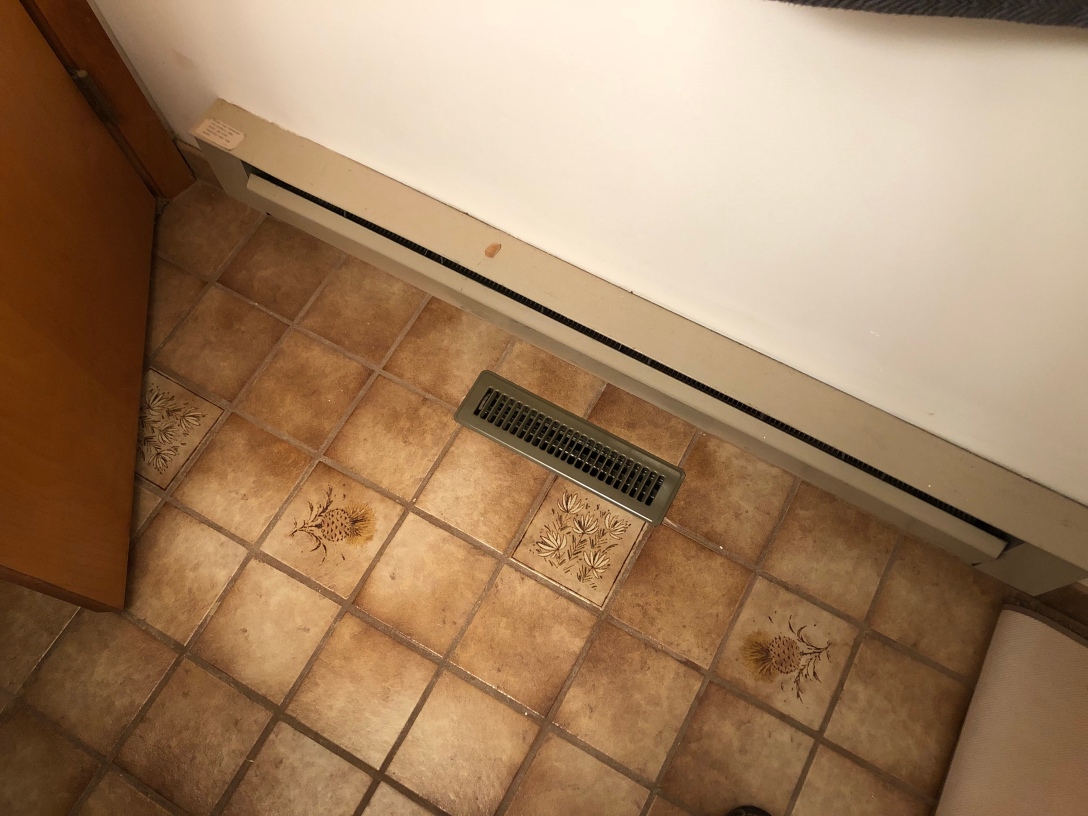 On the last day of construction, they installed the air conditioner outside the house and connected it to the ducting. 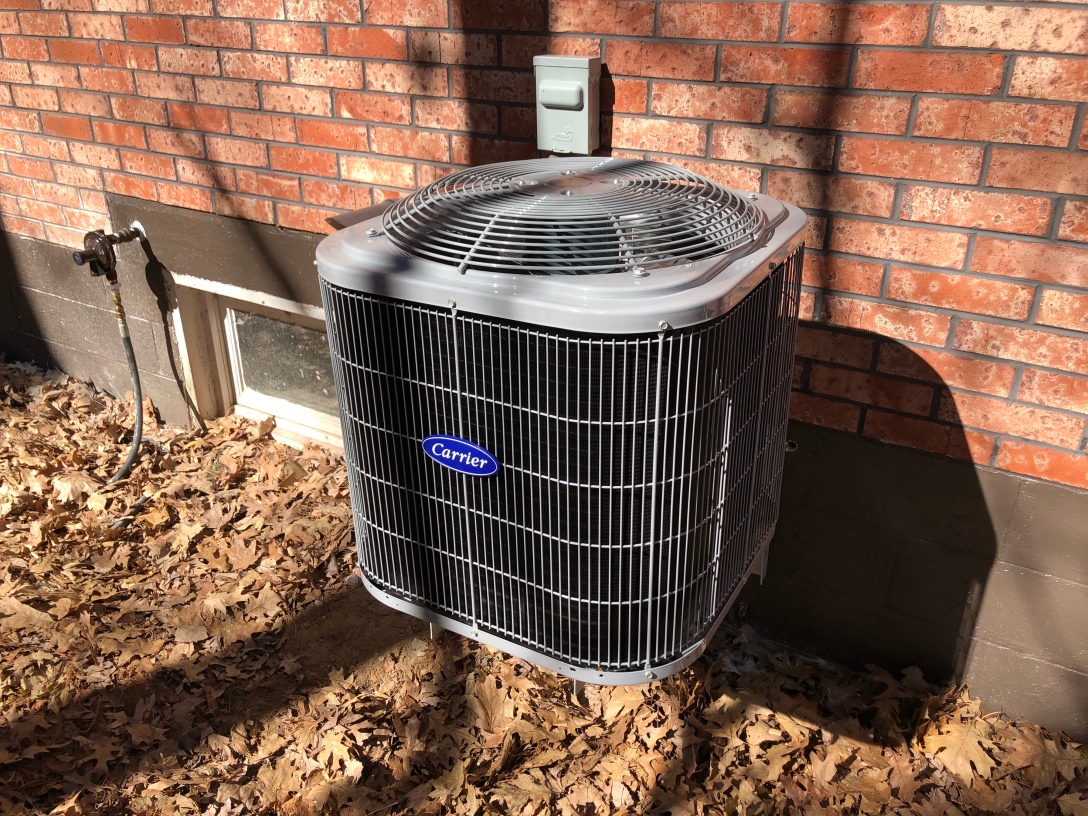 They also installed a WiFi enabled smart thermostat that allows me to monitor and control the temperature from far away, which is important since I typically only go to the lake house on weekends.

After meeting with RA and reviewing their work, I stepped back in. I hauled away all of the foam that had been removed from the ceiling, and put the trim into storage for future use.

I also dewinterized the plumbing, which led to an interesting discovery: some of the pipes that had been removed with the shower resulted in a leak. It was an easy fix though, two 3/4″ shark bite end stops closed the loop, and some JB Welding epoxy solved a minor drip from two very old valves. I was able to refill the pressure tank, the water heater, and the water softener, and the house was back in business for spring. The final results look excellent, and exceeded my expectations. 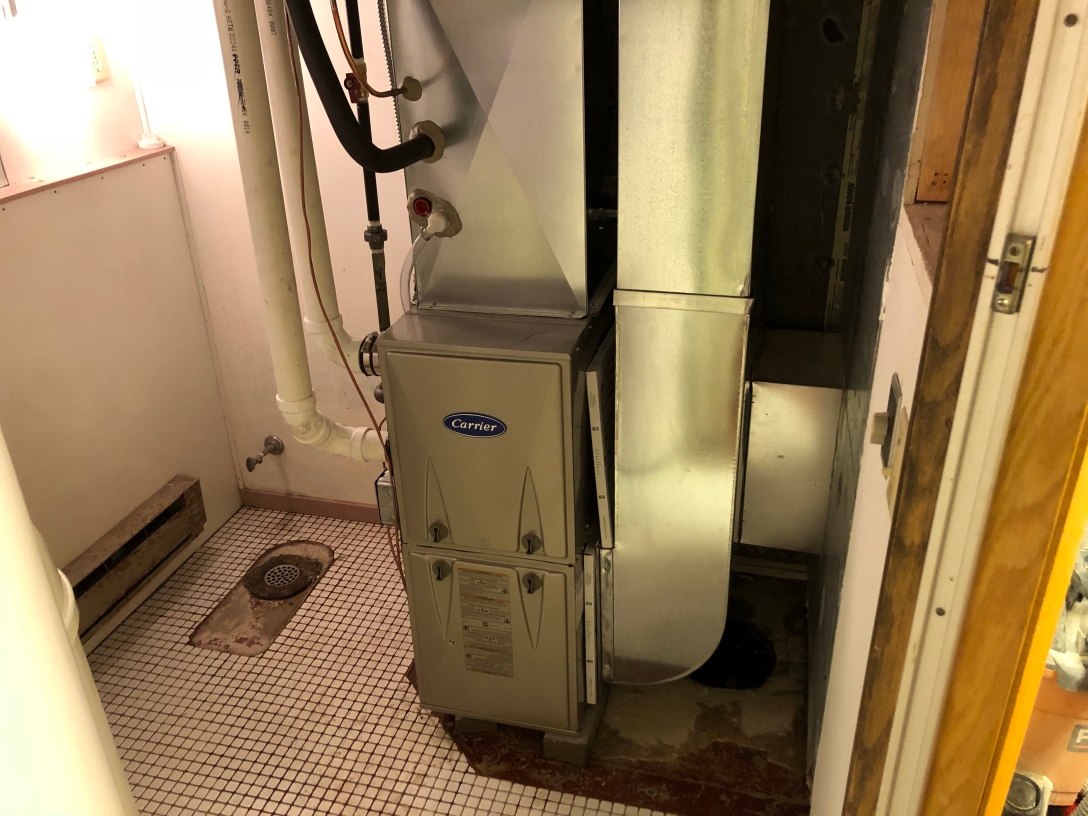 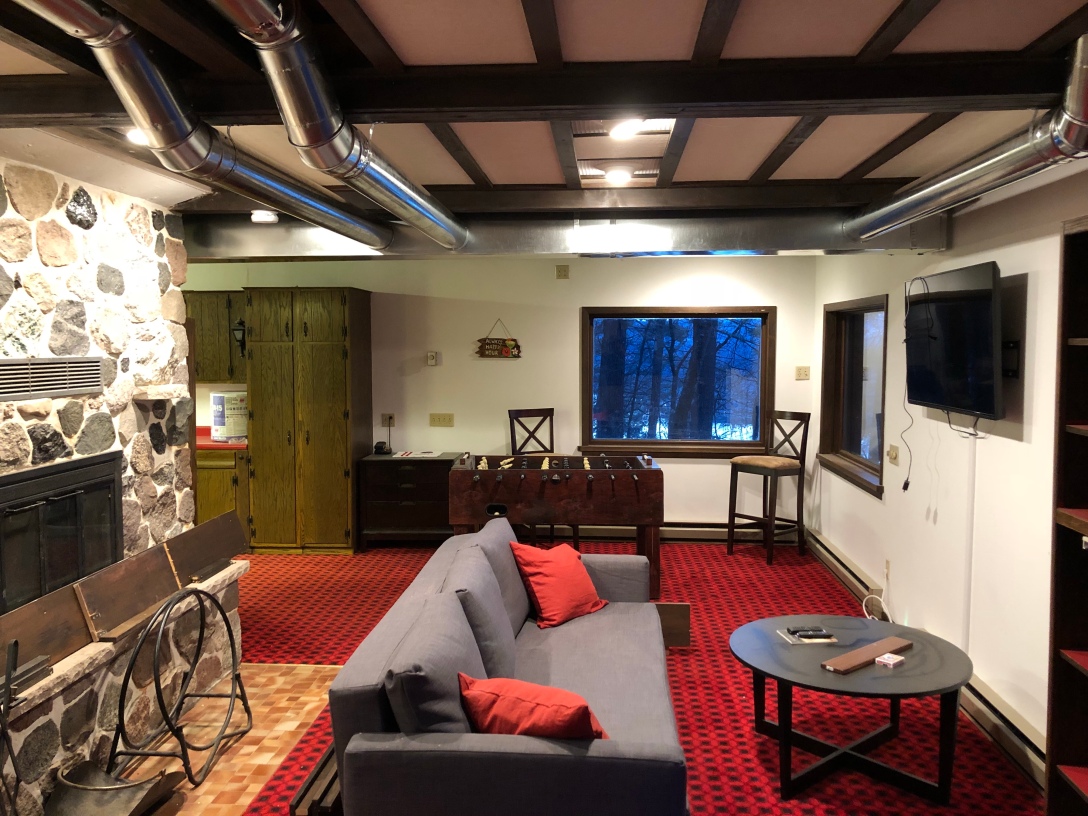 One thought on “Lake House HVAC”